jpost.com: Where business thrives in Olomouc

Olomouc is a beautiful historical city in Moravia, two hours by train from Prague. Since 2010, the BEA campus at Olomouc has been growing on the site of the former tank barracks by the Morava River, with modern facilities for business, education, and acceleration of small and medium-sized companies. Behind the project is the vision and stubbornness of Josef Tesařík, a self-taught entrepreneur, who is looking for a way to contribute to the development of his hometown to succeed in European competition. “I want to build a creative environment where business thrives that will benefit future generations,” says Tesarik. His dream is to turn Olomouc into a region of successful innovative companies, which is why he devotes a great deal of energy to entrepreneurial education for the young generation. He is inspired by Israel, where entrepreneurship and innovations became part of the national culture.
The ICT is the core
After the fall of Communism, the graduate mathematician found himself without a job and, as a self-employed person, started to write software for large companies that needed to register their assets and organize decision-making processes. He later founded the software company Tesco SW, which has more than 280 employees today. It is one of the most important Czech ICT companies, servicing several hundred domestic and foreign clients..
Tesco SW has gained a reputation, especially in the field of information systems for energy management, property management, operation of medical facilities, and systems integration. It also runs two critical infrastructure systems for the Czech government. One ensures the proper identification of people and the protection of personal data in the citizens’ registry. The second system monitors the financing and management of EU projects.
The company is the engine of the BEA campus and the example of a successful business project in which Tesařík also involved his children. When his oldest son graduated from Yale University twenty-five years ago, he had many offers from prestigious American companies, but he was called back home, where his talent and new experience were more needed.
Education for Business
The lack of studies suitable for managers and businesspeople in the Olomouc region led Josef Tesařík to establish the Moravian Business College of Olomouc in 2005. The College is collaborating with local companies and high schools. It has a strong focus on digital education, and part of the BEA campus is a studio for digital communication technologies.
The College is leading a unique European project called the Spationomy, which extends economic analysis for spatial data processing. The current Covid-19 pandemic showed benefits of this approach when the behavior of the European population during the first wave of coronavirus was analyzed.
Czech-Israeli innovations
Last year, the Czech-Israeli Innovation Day on Smart Healthcare took place on the BEA campus. It was not just a one-time event. It launched a process of creating a regional ecosystem for digital health innovations, which is connecting with Israeli partners.
One of the innovations that was born in the BEA campus is Cereb B-Mode Assist, a software tool for digital image analysis in medicine. It was created in cooperation between the team of Prof. David Školoudík and Tesco SW. The software helps diagnose neurodegenerative diseases such as Parkinson’s disease, Huntington’s disease, Winson’s disease, and depression. It is used by several hospitals in the Czech Republic, and they are discussing when it will be deployed in Israel. Tesarik cannot wait for the COVID travel bans to be released in order to visit Israel and talk business.
Zdroj: https://www.jpost.com/international/where-business-thrives-in-olomouc-650718 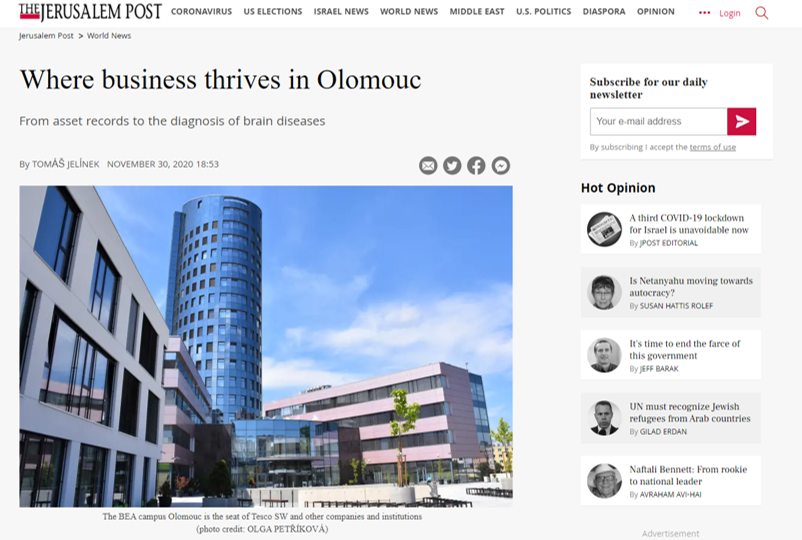